Waking up in VGH with the bottle half full

Happy holidays.
Sorry that the CTTWH has been like a ghost town the past few days, but me, my Solitary Plasmacytoma, my two rods and 15 screws and my ill-willed infection have been a tad busy. We had Carol-Ann's family to our VGH room on Christmas Eve for chicken dinner and then my family -- 14 in total -- came by for your classic turkey Christmas dinner and all the fixings.
Two very good parties.
I've had a couple of very good rehab sessions the last week, which has me positive about getting home sometime soon. I had a minor surgery Tuesday, to do a partial closure on my back wound. They'll complete the closure next Wednesday, and I'll move to G.F. Strong for rehab after that.
We're still having fun. One of the many pitfalls of my current "situation," is that I need to pee in a bucket. (Don't even ask about No.2.) I woke up last night, went to roll over and had trouble moving. Sure enough, there was my bucket, half full, between my legs. Yes, I had fallen asleep peeing.
Posted by Steve Ewen at 9:21 AM 2 comments:

Camping out in VGH for Christmas

Only in my dreams, I'll be home for Christmas.
Dr. Robert Lee confirmed this morning that I would remain in VGH for at least the next 10 days. Carol-Ann, my wife, and others, say that they had figured on that for the past few days. My walking is nowhere close normal following last Tuesday's surgery to boot out the infection that was the aftermath of a surgery seven days earlier to put two titanium rods and 15 screws in my faltering spine.
That, of course, was a side effect of the Solitary Plasmacytoma that had camped out in my t-2 vertebrae. Ah...the good old days.
At some point, I'll need to go to GF Strong for rehab. I've met some of the people there, and they seem top notch.
I'll keep you up to date...
Posted by Steve Ewen at 10:31 AM 6 comments:

I am feeling better after a couple of rough days. Support is a big reason why. Check out this text from John Shorthouse. Always knew he was a Jennifer Beals fan.

Ewen, it's Shorty. Just a quick "hey", nothing more. I hope you're bouncing back from a trying week. To aid in this endeavour, I've included a shot of me and my organ. 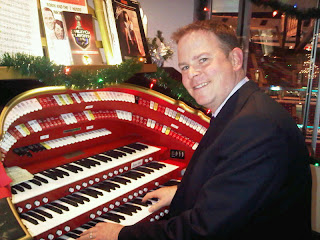 Sad story: the zany Solitary Plasmacytoma that led to my T-2 vertebrae collapsing and two rods and a bunch of screws being placed in my back has led to a blood infection. I had surgery again on Tuesday to clean out the wound.
Funny story: Dr. Robert Lee, who performed the back surgery right before heading to England to visit his family, has been keeping track of my progress during his stay there. He telephoned Carol-Ann and I at the hospital Wednesday. He even had Carol-Ann poke me in the chest because he thought he saw something on an x-ray. There wasn't a problem, though.
Next story: We need to get up and walking. Once we're steady and stable, and infection free, we should be on our way home.
Posted by Steve Ewen at 7:44 PM 1 comment:

Look who's back: Cancer Boy gets his rehab trip on the rails once more after emergency surgery

I'm not sure if we crushed the tumour with humour, but apparently we've smashed the T-2 vertebrae to bits.

Sorry I've been incommunicado of late, but I've got an excuse. I had emergency surgery Tuesday, with two nine-inch titanium rods and several screws inserted to stabilize my spine. We're hopeful that we'll be home in time for Christmas.
It came out of nowhere. We had been through 20 of 25 rounds of radiation for that zany Solitary Plasmacytoma tumour. We were well into walking laps of the pool to strengthen the legs up. There were some struggles of late that we initially attributed to routine radiation fatigue, but, by the time my scheduled appointment with our radiation-oncologist Dr. Morris came Monday morning, my body had given out and given up.
Now, several days after this latest procedure, the doctors and medical staff seemed to be pleased. Dr. Robert Lee, our spine surgeon, graded me 5-out-of-5 on all my strength tests immediately after surgery and he had said that he didn't think I would be at that point until 72 hours following the operation. I've methodically navigated up and down the halls, with the help of a physical therapist and a walker, a few times. I am slow and pondering, but I am moving.
My take on all of this? It's varied. There have been days that I've wondered whether I had it in me to battle again. I can't lie. I know how invested Carol-Ann, my wife, has been in my first rehab. I know how invested other people have been. I was invested, too. And then my heart was broken. Crushed. Shattered.
I know that's not a happy answer. I know that's not an answer people will want to hear. Sorry.
My mood has perked up today, though. Carol-Ann offered to go get a web stick and I ended up having an hour alone in our room. I sat there in a chair (easier than it sounds after you've had a rods and screws placed in your spine days earlier) and cried.
I know this sounds familiar if you've read CTTWH before, but we have had countless people rally around us, and I responded by feeling sorry for myself because the T-2 hadn't stabilized, which at no point the doctors were certain was going to happen? (Second best putdown line surrounding this latest situation came from softball buddy Scott Rintoul, who admitted that, "Some people were floored by all of this, but I totally had it in the pool." The best putdown line comes later.)
I have the most wonderful wife in the world and I have so much I want to do. I want to adopt a child or children with Carol-Ann. Once I get healthy - and I will get healthy - I think we can provide a wonderful home. We're not looking for a baby. I could see us taking in a harder to place kid or kids.
Carol-Ann dreams of going to Wimbledon; we will do that one day. I have so many places I want to see with Carol-Ann.
We will do our charity work; we've had some wonderful celebrity types offer up support already. I talked earlier, too, about running some sort of race for pledges. Right now, I'm looking at the Running Room five-kilometre in Vancouver on May 30. I can't promise that I will run it all, but I will try. Heck, I'll crawl it if I have to, or do it in a wheelchair.
I know, for some of you, this is an old story. More importantly, I know, after a little lapse, that it has a chance to continue to be an old story.
BEST PUTDOWN LINE: "Hey, Ewen...with the rods and screws in there now, can we use your back to put up those magnet schedules? If someone wants to know when the Canucks play next, shouldn't they be able to just look at your back?" --softball buddy Carla McAloney.
Posted by Steve Ewen at 10:32 PM 3 comments:

Steve Ewen
I'm a sports reporter for the Vancouver Province newspaper. I'm currently on medical leave, battling cancer. I have a Solitary Plasmacytoma and doctors say that it's highly receptive to radiation. I'll report on my progress.